Link to a Screenshot of your UI 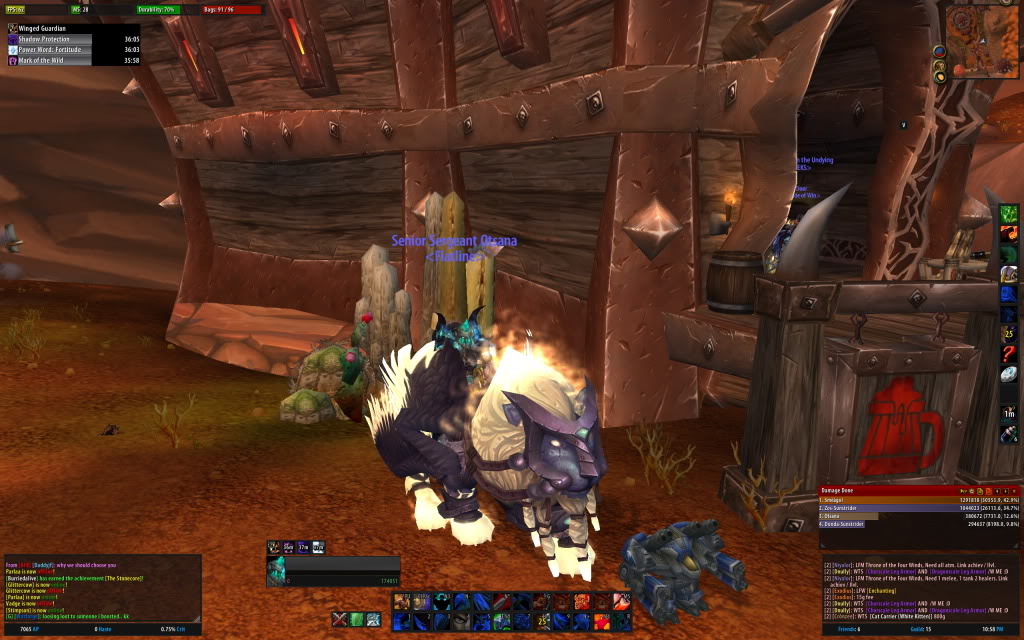 Name your previous guilds and the reason why you left them: Well to name a few would be Entropy on dragonmaw, Wasnt greatly happy with the leadership of the guild at the time and opted to leave and join at the time Random AFK's where ive been ever since after making good friends here. we moved to Ragnaros to play alliance. Over the time like yourself the guild have had many changes but due to not be able to keep a solid raiding setup we taken a huge step back, even after a massive recruitment drive we was unable to back fill the quality of players we need to continue the great spell we had at that present time.

Is it possible for you to log on to our guild Ventrilo during raids? (v3.0.3): Yes
Do you have a microphone: Yes

I come to hear about your guild via daddyjf

Now you maybe asking....how did this guy kill all them lovely heroics and not have any gear on his warrior. Good question. I have recently taken interest in my warrior the last month or so. the main bulk of my overall experience is on my warlock Alonis. link = http://eu.battle.net/wow/en/character/zenedar/alonis/advanced . Now here are the facts. i need to sort out my professions and my therezane rep. but please keep in mine this char has only been lvl 85 for about 2 weeks now. so granted there is alot of work to be done. Otherwise i believe its not just the ingame char you will be receiving but a stable player behind the wheel. which my track recorded has proven inducing such achievements as blackwings bane.

Not a great deal to know besides my name is clark. im a virgo, enjoy long walks in the park and sunsets on the beach.

I like what i read, and Daddyjf is surely talking about you in big words. However i have 2 questions:
1 - Would like to join us on our ventrilo for a little chat?
and 2 - Why the hell did you buy the gay lion?

Dude for real that lion is so fabulous it makes Edward Cullen look like Tony blair.

Sure a chat is fine.

We are satisfied with what we've read and heard from the conversation on ventrilo, and decided two give you a trial period. contact me ingame for an invite.

How can she slap!